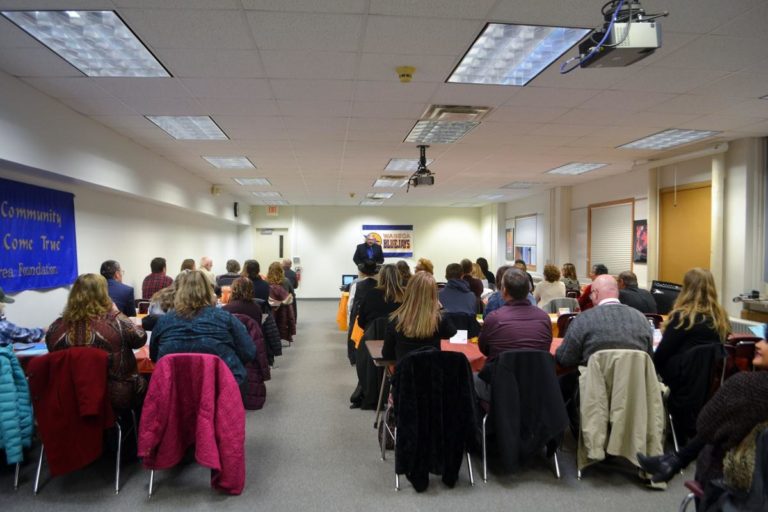 The Waseca Area Foundation awarded over $140,000 at the fall program to community organizations and scholarships.

Every fall and spring, the foundation gives grant money to organizations in the community.

WAF Board Chairman Rob Helms started off the program by sharing facts about the foundation through the years. The foundation is up to about $8.5 million in funds in the 30 years it has been around. These funds are due to numerous generous donors.

Helms introduced Paul Rosenau, who started the Rosenau Foundation fund through WAF in 2009. Since starting the fund he has given over $1 million to the community through grants.

He shared a story of the community supporting a fundraiser his family held for his granddaughter years ago. Rosenau shared how someone stopped to donate money and didn’t participate in the event. They only wanted to help someone in need. Since then Rosenau has been donating to the Waseca Community. 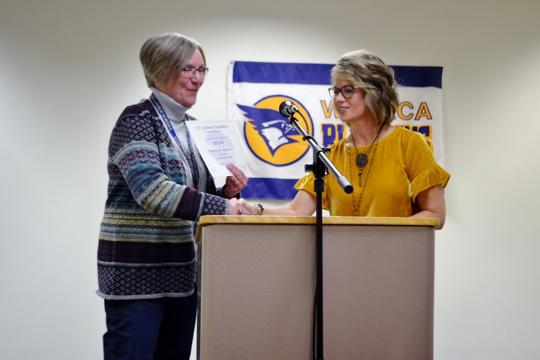 The Waseca Junior and Senior High School received the first grant at the fall ceremony of $20,000 from the EF Johnson Foundation for senior scholarships.

“I would like to say thank you very much for the scholarships for the seniors,” Junior and Senior High School Principal Jeanne Swanson said. “Every year we have an amazing bunch of seniors and it’s really difficult to choose just a few people to receive the number of scholarships that were given and this allows us to give a lot more kids opportunities… and we want to say thank you very much for supporting our kids.” 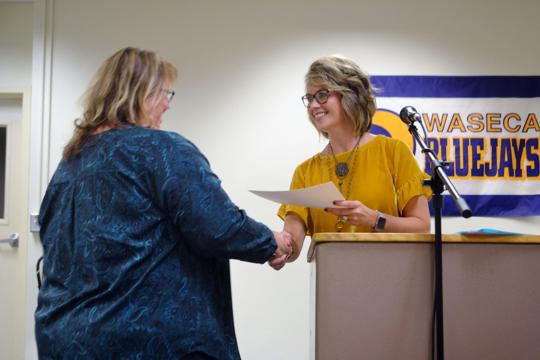 The organization Beds for Kids received a grant to purchase bed, $4,930 from EF Johnson Foundation and $5,070 Rosenau Legacy of Angels fund was given.

This program has given over 1,500 beds since 2010 and it has a policy of one bed per kid per lifetime. This grant will allow the organization to purchase beds and there is a waiting list of about 10 kids currently after giving 159 beds in 2019 so far. The organization provides beds for kids who sleep in poor conditions in both Waseca and Steele counties.

“Good afternoon I am Shari Kropp, the executive director for Beds for Kids and for those of you who aren’t familiar with our program, we provide beds for children who sleep in unsuitable conditions that live in Steele and Waseca County and are between the ages of 2 to 17,” Kropp said. “We have a really big milestone coming up next year that we will be in existence for 10 years, which is great that we’re in existence but it’s also kind of sad that we have to be in existence, because that’s all those kids who don’t have beds that we’re helping out…These funds are so important to us to be able to maintain the program in Waseca County. We are a 100 percent volunteer organization, we have no paid staff and so this really, I cannot tell you how much this helps us maintain the program and we are extremely grateful, so thank you so much.” 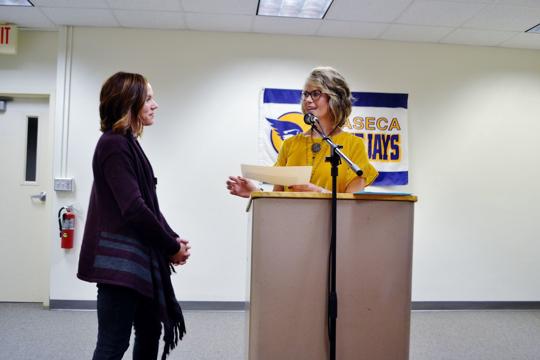 “Thank you to the foundations for this gracious gift,” Lynch said. “We will be implementing the JA company program for the first time at the high school with Donna Hodgkins business class. We are very excited… I’m really excited to see this program take off … These kids will be learning about entrepreneurship and starting their own business and learning what it takes to collaborate, work together. It’s going to be really cool to see unfold and I’m so thankful for this gracious gift so we can implement this program at the high school.” 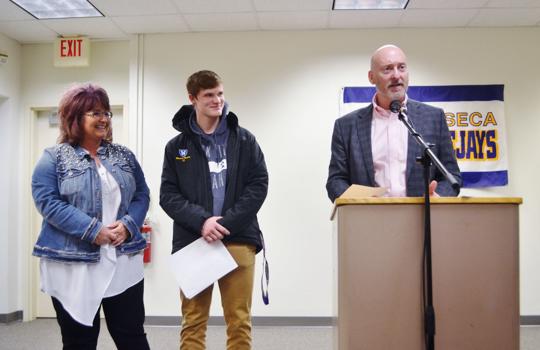 “I’m a senior at the high school and we started this program through Junior Achievement and basically it’s just like a startup company,” Priebe said. “So we were challenged to find something that would both be good to sell at the high school and in our community and the surrounding area so we came up with this startup and it’s called 7 Charms. What we do is sell lanyards and wristlets and also these charms that you can add depending on what sports your in or activities, so we made it pretty universal to sell at the high school and in the communities…that’s kind of our startup right now and on Monday (Nov. 11) we took a pitch to the bank to ask for some money to start up the company and we thought it went really well.”

The program will allow the students to identify a need in the school and the community to sell the product. The students will also learn what it takes to have a start up company.

The class will receive the $5,000 through the grant the Junior Achievement received as well as from the First National Bank Bluejay Debit Card grants gave another $500 for expenses.

Not only does the WAF give grants to local community organizations but the Janesville Area Foundation awarded over $8,000, along with the Rosenau Funds donating over $14,000 to Janesville Community.